We spent the last week in Honolulu. Until recently Honolulu had only decent Japanese food but in the past couple of years the quality has gone up. Several restaurants from Japan have open branches in Honolulu. One of the best is Hakkei on Young St., the Oden there is very good. It’s a branch of a hot spring inn (onsen ryokan) in Okayama with an “Iron Chef”. 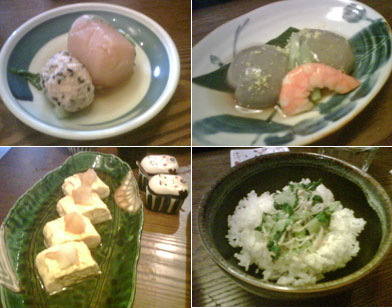 One thing you can’t find in San Diego is a good soba. But in Honolulu, go to Matsugen in Waikiki, its a branch of a restaurant in Tokyo. The location takes the place of Yabu-soba. The soba is handmade and handcut in front of the diners. We went to Matsugen several times and the quality does vary. If you see the person in this photo making the soba, you’re in good hands.

One day the Hagure-keiji came in to eat there with his family for lunch.

We still haven’t found a good sushi restaurant in Honolulu. But once you’ve been spoiled by eating omakase at Shirahama Sushi in San Diego, it’s hard to go anywhere else. I’ve heard that Chef Ota of Sushi Ota sends his apprentice chefs to Shirahama to observe a true sushi chef.

This entry was posted in dining, food, sweets, travel. Bookmark the permalink.

1 Response to Japanese food in Honolulu